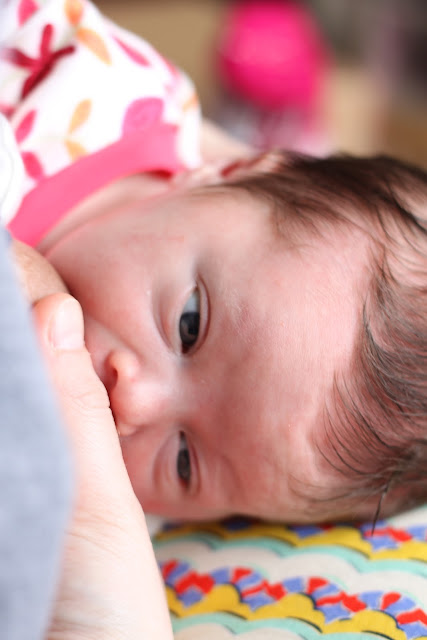 This is the hardest blog post I've ever written. So many of my emotions on the subject are still raw and it's only now I can vocalise in some way the sadness, disappointment, regret and shame that I have felt over the last few months.


When Josephine was 10 days old, after some of the most difficult days of my life, my breast milk stopped and our breastfeeding journey was suddenly taken from us.
We always knew that we wanted to breastfeed our baby. It was something we didn't even need to discuss, so sure were we that it was the best thing for our child; the most natural and most convenient. Of course it wasn't necessarily going to be easy, and it could take a couple of months to really settle into the flow of things, but it would be amazing and beautiful and totally worth it.
When we saw the breastfeeding nurse just after Josephine was born, and Phiney latched on for the first time, the nurse couldn't believe it was the first time I'd done it. We both seemed to have grasped this feeding malarkey instantly and within 5 minutes Josephine was snuggled up on my chest, enjoying her first taste of milk. I felt as much pride in myself at that moment as I did in the seconds after I birthed her, and I could see in Ben's eyes the joy at his wife nursing our baby. For two days, it was feeding bliss. She was feeding a lot, a lot, but I knew that was quite normal and I was loving every second of it, even confidently nursing in front of visiting friends and family.
Then on the third day, I started to get sore. Again, something I had expected to happen, but no less painful all the same. Our midwives watched Josephine latch on a few times, approved of my technique and advised buying some Lanolin to help with the soreness. The next day, the greasiness of the Lanolin had taken effect, soothed my cracking skin, and feeding was once again pain free. For now.
I could easily give a day by day blow of the following week or two. The good feeds and bad. The tears, the pain, the confusion as to whether or not the constant feeding and agony was normal. But to be honest, it all blurred into one long battle. Every day we discussed what was happening with the midwives and every day they assured us this was normal. But it was pain unlike anything I had ever felt and far worse than I had ever anticipated. Plus there was no let up, with Josephine often taking only minutes between hour long feeds; a pattern that continued through the day and night.
Soon I was advised by our midwife to stop feeding on my left side, so deep was the crack in my nipple. Feeding on that breast felt like someone stabbing me over and over again. So we bought a hand-held breast pump and I pumped the left side after Josephine had fed on the right side. The first day of our new routine worked great. The relief of not feeding Josephine from the left side was enormous and I could see some light at the end of the tunnel. But the next day I awoke to a practically empty left breast. And despite an hour or so of pumping, I managed to express barely an ounce. We talked to our midwife and were told to keep pumping it, just in case the milk started once more, but they warned us that if one side stops, it's likely the other side would too. After a few days of pumping, breastfeeding and formula, I awoke to find the right breast just as deflated. And that was that. It went as quickly as it came, and apart from the odd drip here and there, nothing would bring it back.

So that's the facts. That's what happened on the outside. But it was what was happening on the inside that turned our world upside down for those weeks, and why I wanted to write our story for this blog.

The emotional turmoil of not being able to successfully feed your child is something I can't explain. I think of myself as a happy-go-lucky and positive person, but these were the darkest of my life. As the days went by I even began to doubt the bond between Josephine and I. I started to dread being handed my tiny daughter; my own child. This fragile, beautiful creature that was relying on me. I'd find excuses to delay feeding her for just a minute more and I'd have to psyche myself up to her latching on. I would stand in the shower crying. I would sit in the dark, crying. When I spilt 6 ounces and an hour's pumping worth of milk all over our bed, I felt as though I had tipped away the most sacred of liquids and I cried. I barely managed to hold myself together when we had visitors, but when it was just Ben and I, I would break down. Going back and forth as to whether I could continue this journey. Hating myself for my lack of determination and for feeling anything but love towards Josephine.
We knew that the worst days hit as the very common Baby Blues arrived, but on day 8 I asked Ben if he thought it was just Baby Blues or if I was experiencing something worse. I couldn't bring myself to say the words, but I found myself reading the chapter on post-natal depression in the pregnancy book our doctor had given us. Ben knows me better than anyone in the world and during those weeks displayed strength unlike that I've ever seen from him. He took charge; cared for his girls, soothed me, comforted me and supported me. He told me that he believed I wasn't yet on that path, but that maybe I was at the gate; unsure whether or not to take it. We knew then we had to do something to change the situation because, honestly, it had started to take away the joy of those first days of parenthood; our first glorious days with Phiney.
Looking back, the advice given to us by our midwives during those weeks was often contradictory and confusing. We were told on more than one occasion that our positioning was perfect, before a new midwife realised I was moving my boob into Josephine rather than putting her in line with where it naturally sat, probably causing the friction and ultimately the pain. I was told not to use nipple shields as these would stop milk production and yet my friend Ash was told to give them a go by a midwife based at the same doctor's surgery as us, and is, 4 months later, still feeding her daughter using them as she won't latch on otherwise. And we remember fleeting comments regarding my milk production, or lack of. Something that we didn't really pick up on at the time, given our seriously tired states. Today we wonder if I was ever producing enough milk; if that was why Josephine was feeding so much for so long, which led to me getting so sore, being in so much pain and ultimately my milk stopping deso easily. But who really knows. On some level Ben and I think my body just decided to shut it down, stop the pain - both physical and emotional. That it knew my stubborn nature would never give in and that, maybe, real psychological damage could be done. But who really knows.
What I do know is this; Josephine didn't care where her milk came from. Bottle, boob; formula or breast milk, as long as she was getting fed. For that we are truly thankful. It was me who was left scarred and broken. I find myself explaining the whole situation whenever we are asked if we bottle or breast feed, and I still want to stand up in cafes whenever I get out a bottle and shout to everyone that it wasn't my choice to feed her this way. Peering through my fringe, expecting to see glances of judgement from other women. Because, honestly, I was probably someone who would have done that before. And I've held back from writing certain posts here that make some remark to bottle feeding, as I wanted to explain the situation to you all first.
Over the last few months I've been astounded by the recollection of similar stories and situations from other new mothers I've met. Some have battled through and some, like me, had that decision taken away from them. I think that the method with which you choose to feed your child is entirely your decision. It's about what makes you happy, and your baby happy, and that's a great thing. But I can't help but feel I was robbed of that choice. That my body let me down by failing at the job it was built to do; to feed my child. I still, to a certain extent, feel envy when I see my friends breastfeeding and shame when I pull a bottle from my bag. It's something I'm working on to get over, dealing with in my own way. Because in my heart I know that I did all I could to keep breastfeeding, and went beyond what many people would to give Josephine the best start in life. Our daughter is sweet and lovely, divine and bright, alert and growing perfectly: that's all that matters.

I decided to write this post because I honestly felt that the difficult side of breastfeeding, and I mean the really difficult side, is often kept quiet and hidden away as if something to be ashamed of. I felt at times like I was the only one who felt like giving into the pain and wished I could have read more than fleeting sentences exclaiming the odd bit of discomfort. Yet when I spoke of our situation to those other new mothers, I felt comforted and reassured. I don't want to scare anyone or put anyone off, after all so many women seem to have a comparatively easy time. And the days when it was good were the most beautiful; I would go through it all again 100 times to experience those moments once more. I just wanted to share my story. To let anyone else experiencing the same thing know that you're not alone. And that whatever happens, you're doing an awesome job.

I feel only adoration and love for my daughter and utter joy when I'm with her, and I in no way believe that bottle-feeding her has affected our bond. It hasn't; pure and simple. In fact going through that experience with her, and Ben, has only strengthened our bond as a family, I'm sure.

Someday, when baby number two arrives, we'll try breastfeeding again. Only this time we'll be more prepared for wherever that journey takes us.


Ben took this picture when Josephine was 5 days old. I will always cherish it.
Posted by Nell at 21:07